Pontius Pilate's Dilemma: What is truth? 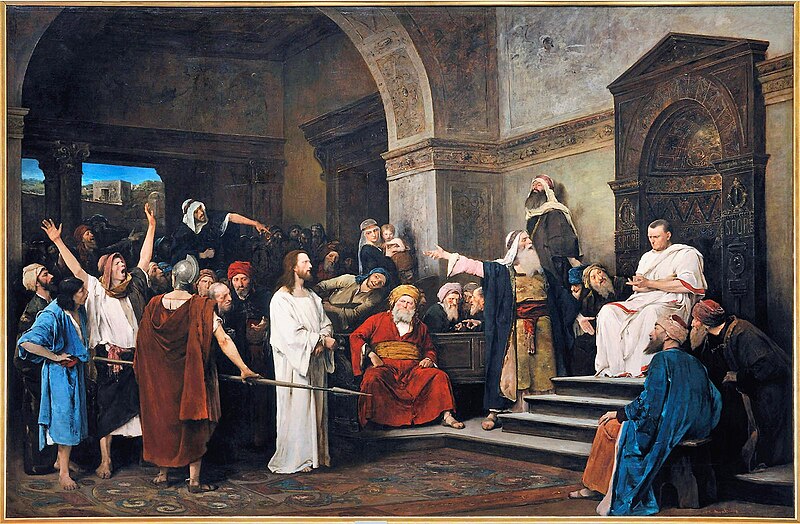 This story is a fictionalized account of what may have been going through Pontius Pilate’s mind as he deliberated about Jesus. It's in first person, which means that it's from the perspective of Pontius Pilate.

When the chief priests of the Jews brought Jesus to me, I tried to get out of handling the case. I'm not ashamed to say that I do that when possible. You don't reach high office by wasting time on things you don't have to.


"What accusation do you bring against this man?" I asked.


They replied, "If Jesus was not a criminal, we would not have brought him before you."


When you hear irrelevant evasions like that over and over as a judge, they become very tiresome. "Take him yourselves, and judge him according to your law," I told them.


They said, "We are not permitted to put anyone to death."


So, they were after Jesus' death, but they didn't want to bloody their own gentle hands doing the deed. They despised me, but they wouldn't hesitate to turn their dirty work over to me if I allowed them to. They told me how Jesus had stirred the people up, even as far away as Galilee.


I’d heard about Jesus, that he was a wandering prophet and he had a following. The thought of disposing of a potential insurrectionist didn't bother me in the least. However, the city was crowded, and some of his followers were bound to be around. There was no telling what they would do if I put their precious leader to death. They might get scared or they might start a riot. Crucifying Jesus, then and there, didn't seem like a good idea.


"Did you say Galilee? Is Jesus a Galilean?" I asked.


They told me he was. I told them to take Jesus to Herod, who was judge over that district. There was no reason a lower court couldn't handle the Jesus situation. Problem solved, or so I thought. Unfortunately, Herod soon sent him back to me.


Once again, Jesus was brought before me. I tried to squeeze a confession out of him. That's always one of the first things I do. It's so much simpler that way. If I can get a confession, the only thing left for me to do is to work out the punishment. Otherwise, I have to sift the truth out of all the lies the witnesses tell me. People have no idea how difficult that can be, especially when you're dealing with criminals, lawyers, and holy men who routinely tell lies to get what they want.


If I could get Jesus talking, he might incriminate himself, the way many criminals do. "The chief priests are making serious allegations against you, Jesus. Don't you have anything to say for yourself?" I asked. But he didn't answer. He seemed to understand that anything he said would be used against him.


Finally, he spoke. "My kingdom is not of this world."


It was a preposterous, laughable statement. It confirmed something I already suspected: that Jesus was not right in the head. However, being a little crazy was not a crime.


I wanted to keep him talking, talking until he began to contradict himself, the way liars always do after a while.


"That's right," he said. "I came into this world to bear witness of the truth. Everyone who is of the truth hears my voice."


I couldn't help rolling my eyes. In front of me was a man, a whacked out uneducated rabble-rousing carpenter, telling me, the Governor, about truth. To be a judge is to embark on a quest for the truth. As I've already mentioned, finding truth is sometimes very difficult. I've heard all kinds of stories, from all kinds of people who all insisted they were telling the truth, the whole truth, and nothing but the truth.


There was something odd about Jesus. Although he appeared to have some serious mental problems, he seemed intelligent, far more intelligent than the average working man. Also, people who are not all there sometimes have stunningly insightful things to say. "What is truth?" I asked him.


He made no answer. He was so unlike the typical guilty person. People who are guilty feel compelled to defend themselves. Most of them have no idea how stupid they sound. Jesus seemed to know that the more he said, the less truthful he would sound. Either he truly was innocent, or he was very sly. In any case, I was beginning to respect him.


I went outside and told the crowd, "I find no guilt in him. You people have a custom that I release a prisoner for your Passover. Do you wish that I should release the King of the Jews?"


"Not this man. Give us Barabbas," they shouted.


Then, right in the middle of it all, a messenger showed up with an urgent message from my wife. She'd had a terrible dream about Jesus and she implored me, through the messenger, to have nothing to do with that Jew.


I didn't have time to think about that. I had to get back to dealing with the mob. "Which of these two do you want me to release? Jesus or Barabbas?"


I thought to myself, I'll give you Barabbas, alright. You people deserve Barabbas. "But what shall I do with Jesus?"


"Crucify him," they screamed.


I had Jesus whipped and I let the soldiers rough him up. There was still the possibility that Jesus would confess, but I didn't expect that. After the beating, Jesus looked very bad. Most people instinctively feel a degree of pity when they see someone in that condition. I was hoping the mob would be satisfied.


"Behold the man," I said, as the soldiers brought him out again.


This mob was peculiar and hateful. "Crucify him," they screamed.


They kept on. "He must die because he claims to be the Son of God!"


I hadn't heard that before. I went back inside and I asked Jesus, "Where are you from?"


He wouldn't answer. I had a job to do and he wasn't being helpful. My questions hadn't worked. The whipping hadn't worked. It was time to get tough. I didn't want to kill him, but I needed him to understand that I could.


"Do you realize, Jesus, that I have the authority to let you go or to put you to death?" I asked.


Then he said something astonishing, something I'd never heard before. "You would have no authority over me unless it had been given you from above," he said. That was a wiseguy remark, but it was also a wise statement. I could easily have accepted it if I had thought that he was speaking of Caesar.


I again went outside, trying to find a way of releasing Jesus without angering the crowd. However, they wanted Jesus dead. People were saying that if I released Jesus, I was no friend of Caesar. It was the first time I’d ever heard of the Jews caring about Caesar!


The whole day was out of kilter. Jesus didn't appear to be guilty of any real crime. Yet, the Jews insisted on his death. He said he was a king but his kingdom was not of this world. And then there was that strange message from my wife. What were the gods trying to tell me? It was getting hot out. The mob was unruly. Something had to be done before things got out of hand.


Executions never bother me, but this business was more delicate than usual. I saw that the safest course for me was to let the crucifixion proceed, but to do so in a way that shifted the blame to the chief priests. I sent for a bowl of water and washed my hands in front of the mob. "I am innocent of the blood of this man. The responsibility is yours," I said. Finally, I turned Jesus over to the soldiers to be crucified. The crowd settled down. Thank the gods.


Nothing seemed to make them happy. "Look," I told them. "You got what you wanted. The man is up on a cross and he'll be dead before long. I'm not changing the sign. What I have written is written. Now, why don't you people go home and do whatever you do for Passover?"


That afternoon, a follower of Jesus, Joseph of Arimethea, requested the body. Joseph was a wealthy and respectable man. Not at all the kind of person who would associate with a criminal. He seemed nervous in my presence, but there was no reason for him to be. He actually impressed me as a far more decent man than any of the priests I had encountered that day.


I was surprised to hear that Jesus was already dead. Death by crucifixion is supposed to be slow and agonizing. The longer people walk by and see the dying person in agony, the stronger the message that resistance against Roman authority would not be tolerated. The problem with Jesus was that I hadn't really intended to crucify him. I let the soldiers go too far in beating him, weakening him before the crucifixion. When one of my centurions had verified that Jesus was dead, I told Joseph he could have the body.


A bit later, the chief priests came to me yet again. I was beginning to wish I could crucify a few of them. They told me that Jesus had claimed he would rise from the dead and there needed to be a guard posted by the tomb to make sure no one tampered with it. "You have temple police," I told them. "They can guard the tomb."


I look forward to the day when I can leave this hellhole called Jerusalem.


Easter Trilogy
This story and two others are available on Kindle or on Kindle apps. One of the other stories is Pilate's Dilemma and it's from the perspective of Pontius Pilate. The other is The Epistle of Judas and it's from the perspective of Judas Iscariot. If you read on Kindle or on a Kindle app, you can get it for free for a few days this week. (I always make the ebook available around Holy Week.)
http://www.amazon.com/Easter-Trilogy-Epistle-Pilates-Criminal-ebook/dp/B0079T9XDA

There's a video on Vimeo called Pilate's Dilemma. It covers some of the same ground in an interesting way.